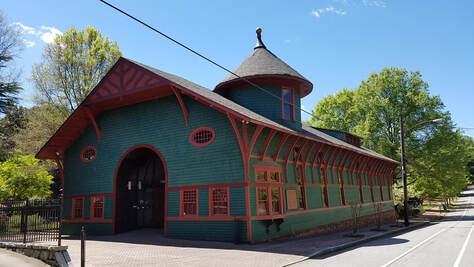 ​Inman Park was the first planned residential suburb developed in Atlanta. Its promoter, Joel Hurt, was one of the city's most important early builders. Improvements to the district, such as streets, a park, part of Atlanta's first electric streetcar line, landscaping and tree planting were well underway by the time the first lots were put up for auction in 1889, officially opening the development of the Inman Park suburb. Subsequently, more land was acquired and more lots subdivided by Joel Hurt's company, the East Atlanta Land Company, and Samuel Inman, the financier and cotton broker for whom the area was named. 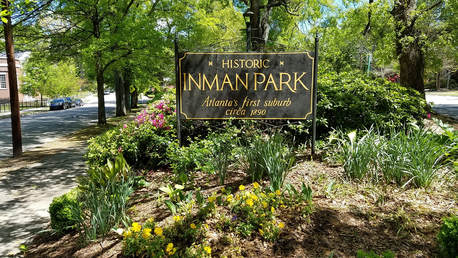 ​Inman Park was for some years occupied by many prominent Atlanta families who built typical late 19th-century Victorian homes on its picturesque landscaped streets. The founder of the Coca-Cola Company, Asa G. Candler, and his brother Warren A. Candler, a bishop in the Methodist Church and supporter of Emory University, both lived in the district. Among other important citizens of Atlanta who also lived in the neighborhood were Wilbur Fiske Glenn, an influential Methodist minister for whom Glenn Memorial Church on the Emory University campus is named; George King, founder of Atlanta's King Hardware; former Governors Allen Candler and Alfred W. Colquitt; Robert Winship, founder of Winship Machine Company; Ernest Woodruff, financier and officer of the Coca-Cola Company and his son Robert, who later assumed a prominent role in the Atlanta community.

What you will see... 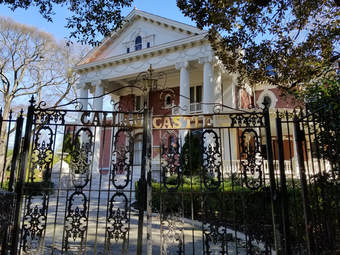 ​​In this historic district you will find examples of Queen Anne architecture, Colonial Revival, and Shingle Style homes and bungalows. Notable buildings include the Jacobean Revival home designed by Atlanta architect W. T. Downing, called the Ernest Woodruff House, built in 1902. At the intersection of Euclid and Elizabeth streets are the Joel Hurt House and the Asa G. Candler House. The Hurt House, a brick building also designed by Downing, has a landscape designed by the Olmsted Brothers, the sons and successors of Frederick L. Olmsted, and the home itself reflects aspects of the Prairie School style. The Candler House is a monumentally scaled, red brick home articulated by white wooden details including a two-story Ionic columned portico, arched windows and doors, and ornamental cornices. Distinctive landscape features also characterize Inman Park; in addition to the two triangles of open space at the intersection of Euclid and Edgewood avenues, known as the Triangle and the Delta, Springvale Park provides a large corridor of green space in the center of the area. Inman Park's landscape designer was James Forsyth Johnson.
Inman Park lies near the eastern boundary of the city of Atlanta and is due east of the financial center called Five Points. The district is roughly bounded by Lake, Hurt and DeKalb aves. and Krog St. The houses in the district are private residences and are not open to the public.
SOURCE: United States National Park Service

What we love about Inman Park...