Who were the first inhabitants of this area?

The history of early Georgia is largely the history of the Creek Indians. For most of Georgia’s colonial period, Creeks outnumbered both European colonists and enslaved Africans and occupied more land than these newcomers. Not until the 1760s did the Creeks become a minority population in Georgia. They ceded the balance of their lands to the new state in the 1800s.

​At the foothills of the Appalachian Mountains, northwest Georgia was home to generations of Native American populations including ones of the Mississippian Culture that lived there from 1000-1550 A.D.  The Mississippians are known for building mound-like structures that were used as sites for temples, chiefly homes and burial buildings in their villages.  One of the most well preserved villages of this era is the Etowah Indian Mounds located in Cartersville.  Six earthen mounds are located on-site in addition to a museum that allows visitors to explore the culture's rich political and religious traditions that included decorating themselves with tattoos, sea shells, and feathers.

​In the region that became Atlanta – part of the Muscogee Creek Confederacy — a significant Native American presence was the village called Pakanahuili (Creek meaning Standing Peach Tree), a trading center at the juncture of Peachtree Creek and the Chattahoochee River. ​In the early 1800s the Chattahoochee river represented the division from the neighboring Cherokee nation. The Creek village which was situated at a high point near the mouth of Peachtree Creek offered vital trading opportunities between tribes and later with the colonies.

​A Creek Indian village on both sides of the river at mouth of Peachtree Cr. Whether it was named for a "pitch tree" or a peach tree, it occurs, officially, as Standing Peach Tree in Gov. John Martin's letter of May 27, 1782, to Gen. Andrew Pickens of S.C. Martin wrote of a rumored foray on the E. Georgia settlements planned at Standing Peach Tree. The ancient trail: Buzzard Roost (mouth of Utoy Cr.) to Standing Peach Tree &, via Moore's Mill Rd., to Buckhead - thence N.E. on Hog Mtn. Ridge, was the original Peach Tree Trail. Later, the Hog Mtn. section of it, prolonged S. to Atlanta, was designated Peachtree Road. [Historical Marker at Standing Peachtree Park in Buckhead]

What was it like when the "white man" arrived?

​"About 1835, settlers built a one-room log cabin school on land ceded from the Indians just 14 years earlier — on the same site our church now occupies. Water for the school was carried in buckets from a 'cool, clear, sparkling' spring located across the dirt road from the school. The water from the spring came from under a rock, and rocks formed the sides of the spring. Surrounding beautiful trees made it a delightful, cool, shady place; the area became known as the Rock Spring community." — from the Spirit of Rock Spring: A History of Rock Spring Presbyterian Church by Barbara Wright Cheshire, PhD

​"In 1848 Atlanta was only a small country village in the heart of an almost impenetrable wilderness, surrounded by huge forest trees and thick undergrowth. Now we have a magnificent city, with long stretches of magnificent thoroughfares, and many of her streets paved with the best material known... Atlanta was built up my mechanics and energetic merchants of small means. One of the peculiarities of Atlanta's population is their intense love for the dear old place. Her citizens may move away, but eventually return, if able to do so." — Nicholas A. McLendon, 1829 - 1912 (Mary's McLendon's husband)

How and why did Atlanta end up where it did?

​Atlanta sits atop the Appalachian Continental Divide. The area runs along DeKalb Avenue and Lee Street in Atlanta. This is the line where water on the western side flows to the Chattahoochee and Flint Rivers and onto the Gulf of Mexico; and water on the eastern side flows to the Ocmulgee River and onto the Atlantic Ocean. These divides are called watersheds. The City of Atlanta lies in the watersheds of the Chattahoochee, Flint and Ocmulgee watersheds. Each of these watershed has sub-watersheds, made up of local creeks called tributaries, each like a branch of a tree. Proctor Creek in West Atlanta is a tributary of the Chattahoochee River. Intrenchment Creek in South Atlanta is a tributary of the South River, flowing into the Ocmulgee River.
Source:  Stories from Intrenchment & Proctor Creek,  Chris Lemons, President, The Peoplestown Neighborhood Association​

​The Western and Atlantic Railroad was established by the State legislature after another rail line connecting Charleston to Cincinnati bypassed the State, and went through Tennessee instead. A convention was held and it was decided that the State of Georgia would build its own railroad through the center of the State and allow private branch lines to join with it. When the legislature met in November of 1836, a bill to construct a railroad at State expense was introduced and passed 76 to 65. No specific locations for terminal points were named but generally they were to be on the Tennessee line near the Tennessee River at or near Rossville and then in a direct route to the southeastern bank of the Chattahoochee River.

Colonel Stephen Harriman Long was hired to survey and build the road on May 12, 1837. After several earlier moves it was decided that the line should extend south of the river to provide a better location for lines to Athens, Madison, Milledgeville and Forsyth. The location was changed in 1837 to land Lot 78, District 14, DeKalb County (between the present Forsyth and Magnolia streets). After construction began in 1838, discussion continued on the location of the southeastern terminus. Then, in 1842, a new and final point was established, only 1200 feet from the previous point, in the northeast corner of Land Lot 77, 14th District, DeKalb (later Fulton) County. This point was located at Loyd Street, now Central Avenue, between Alabama and Decatur streets from surveys by C.F.M. Garett and F.C. Arms. A five-acre tract including the point was donated to the State by Samuel Mitchell in 1842 which allowed for the construction of the depot buildings. In 1850 the zero milepost was placed at this location. From this small, struggling railroad town has grown one of the largest metropolitan cities in the country. ~ Source: U.S. National Park Service
​The Zero Milepost stands as a reminder of the early railroad days and the birth of the city of Atlanta. This stone milepost marked the southeastern terminus of the Western and Atlantic Railroad. It was this railroad that provided the impetus for the beginning and subsequent growth of the city of Atlanta and marks the center of the city from which the Atlanta city limits were measured. The rectangular, stone marker measures approximately one foot wide on each side and 7-feet tall. The crown is pyramidal and the inscription "W & A RR 138" is roughly carved into one side and "W & A RR OO" on another. It now resides at the Atlanta History Center in Buckhead. 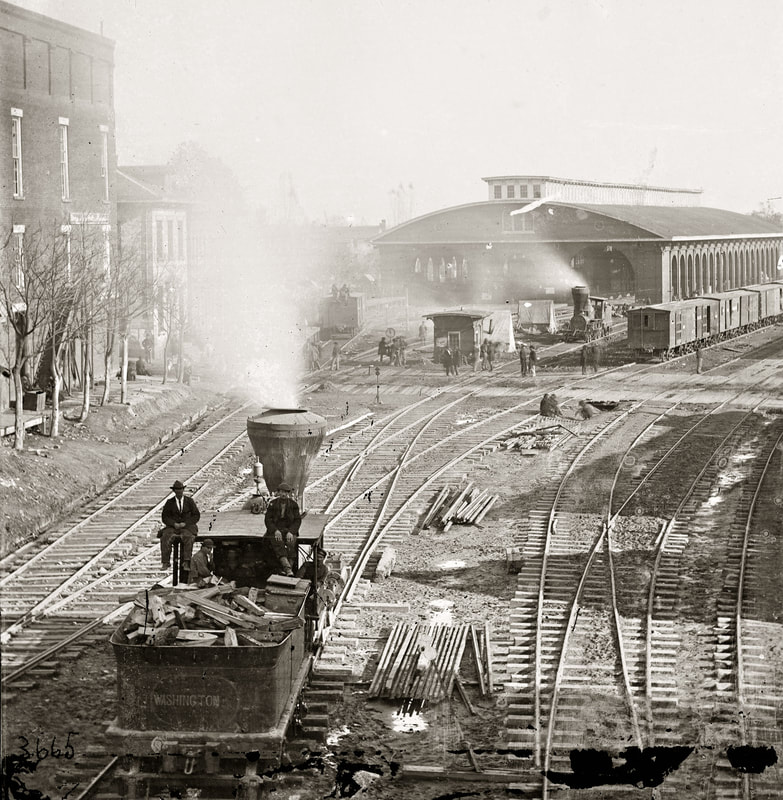 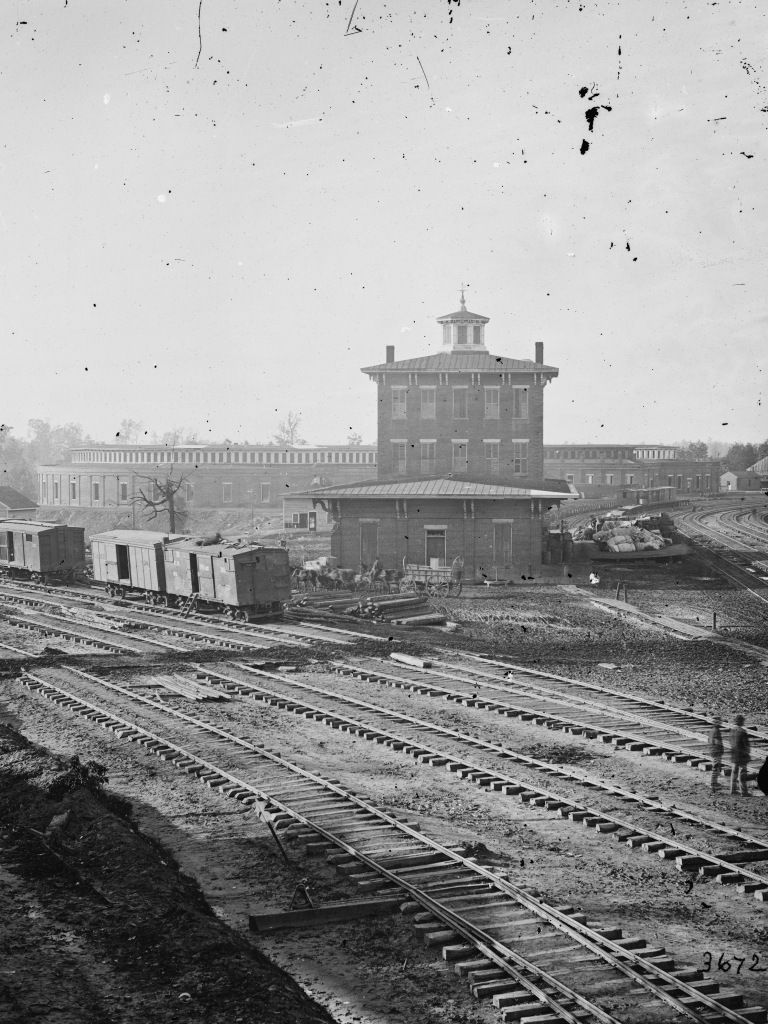 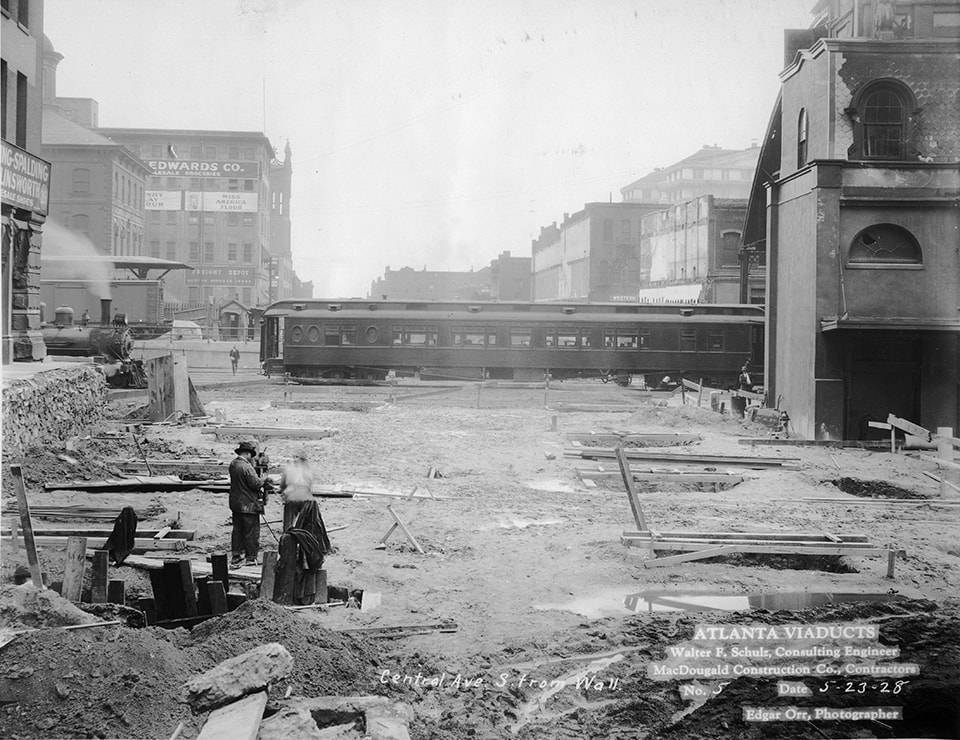 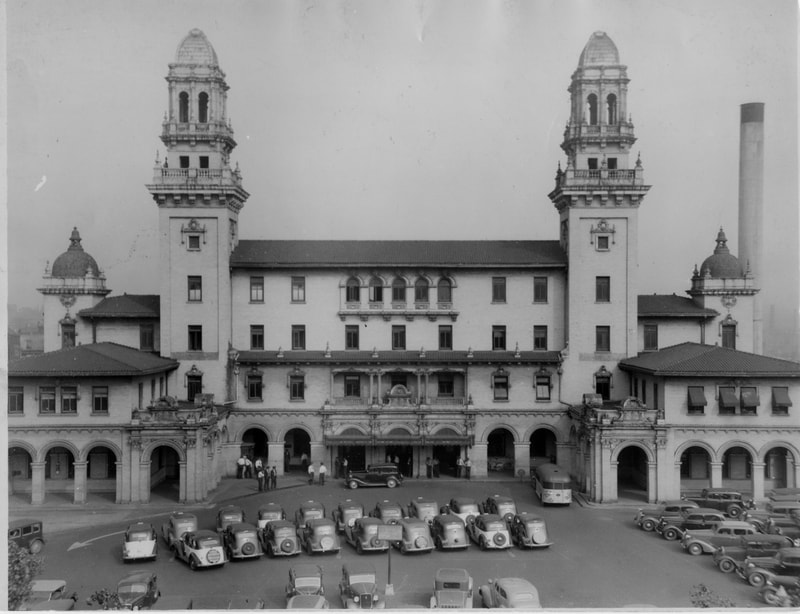 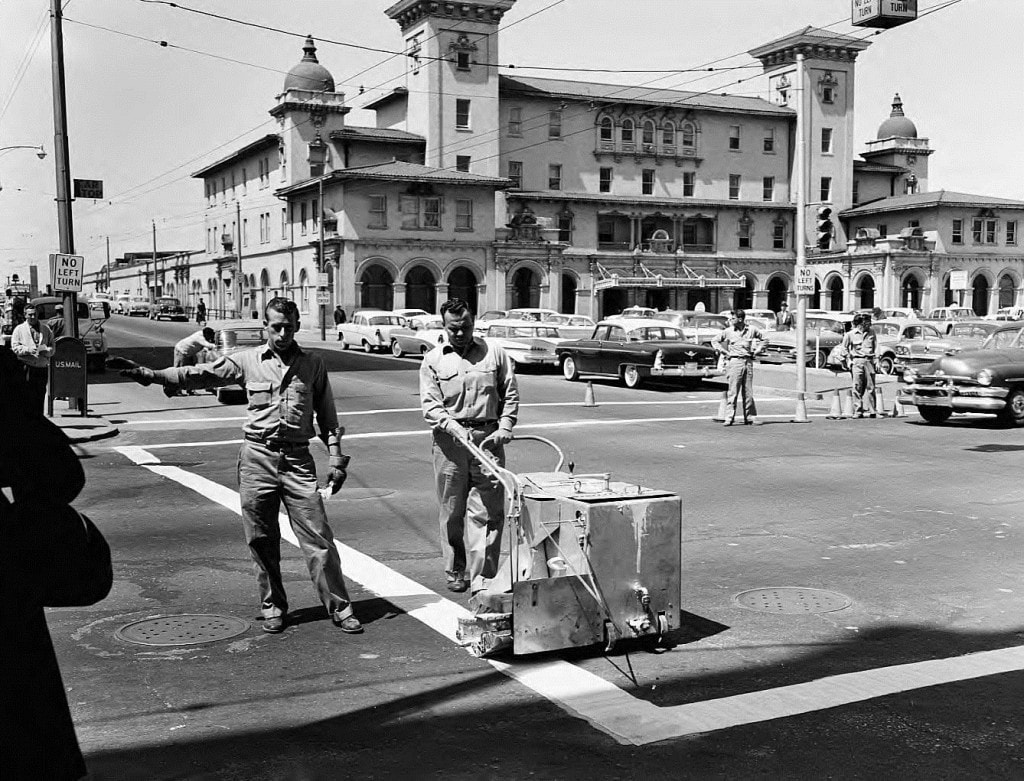 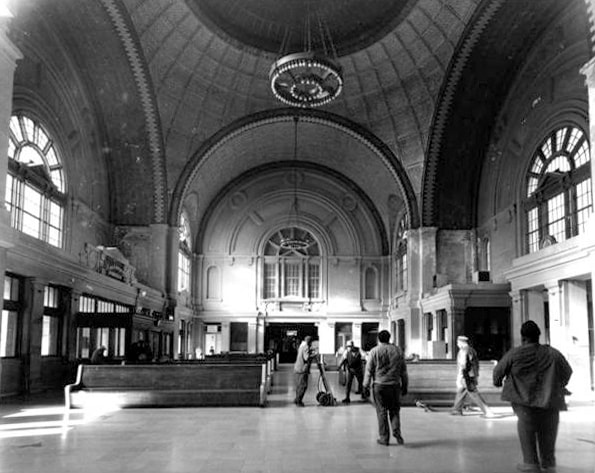 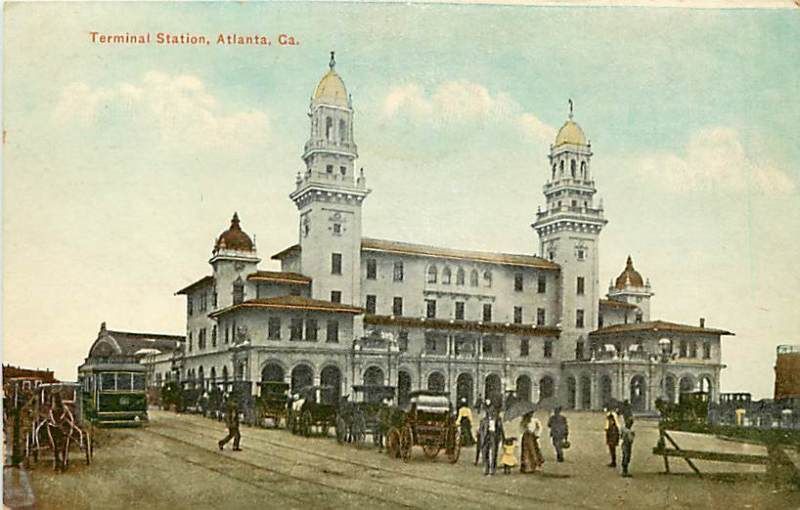 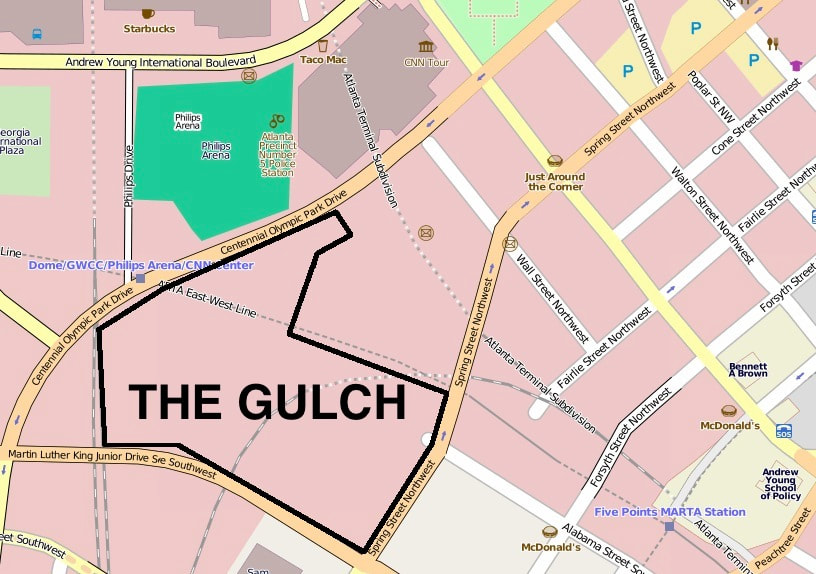 The Gulch: Then & Now (looking north from Peters St bridge)
See also: Things are heating up along ATL's Ring of Fire

Centennial Yards, a project by California-based CIM Group expected to span 50 acres and cost upwards of $5 billion, hosted an official kickoff Tuesday with dignitary speeches, milestone commemorations, and the unveiling of new renderings. Anchored by downtown attractions Mercedes-Benz Stadium and State Farm Arena, Centennial Yards is expected to eventually create more than a dozen city blocks in the Gulch. That's the sunken mishmash of parking lots and railroad property that’s long been a civic canker sore and magnet for grandiose redevelopment ideas that went nowhere.

​As new renderings suggest, Centennial Yards is envisioned as an architecturally varied mix of retail, apartments, offices, and hotel rooms. It’ll all be backed by a nearly $2 billion tax-incentive package—the largest in Atlanta history and subject of a lawsuit. (In June, the Georgia Supreme Court voted unanimously in favor of $1.25 billion in bonds that CIM says it needs to build Centennial Yards, clearing the way for the Southeast’s biggest planned development. CIM reps noted Tuesday that 20 percent of all future residences that rise out of the Gulch will be designated as affordable for 99 years. They’ve also set a 38 percent participation goal at Centennial Yards for minority and female enterprises and small businesses. 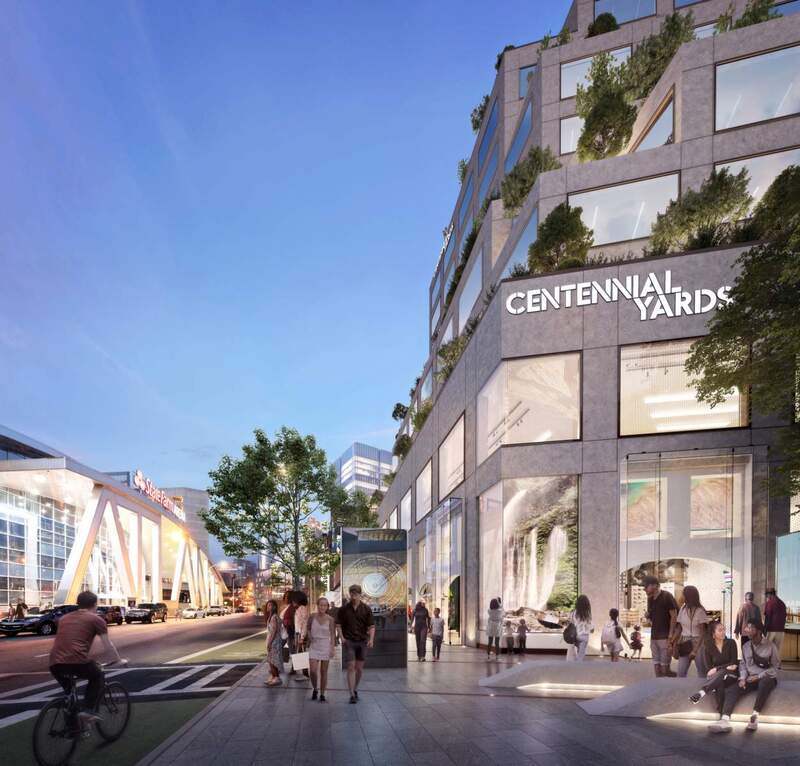 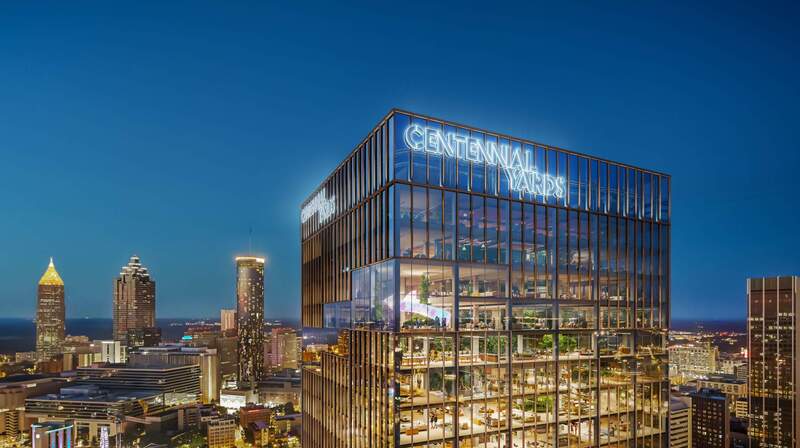 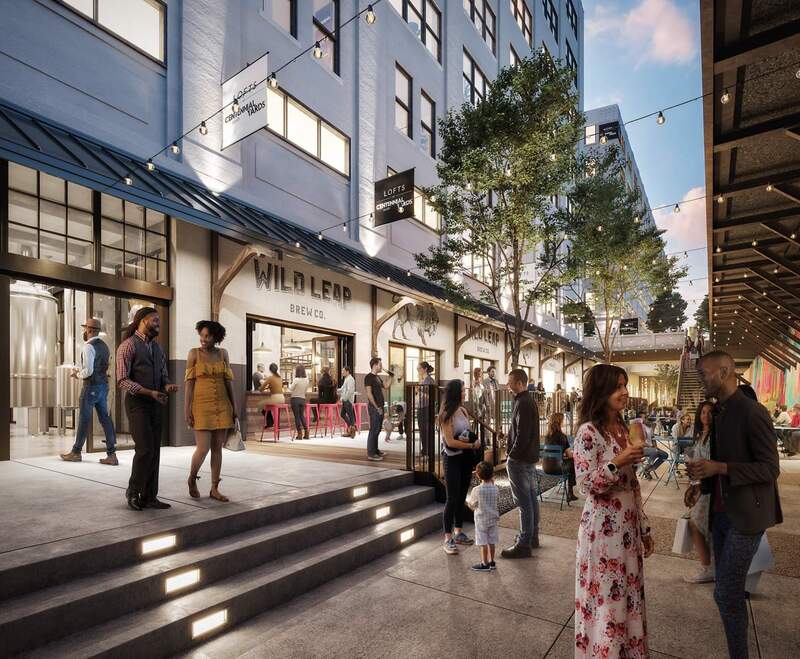 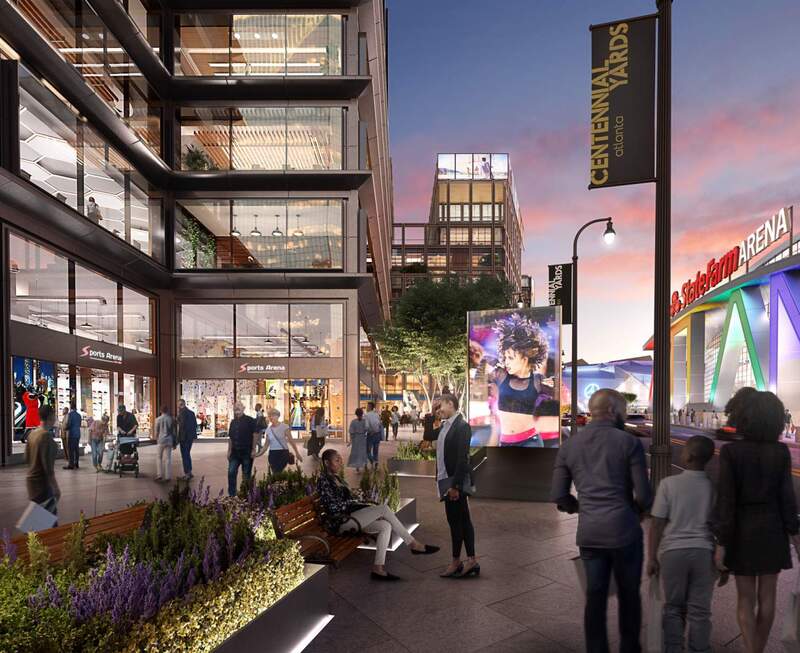 “Downtown Atlanta is a place in need of revitalization, and this project will be the catalyst to revitalize downtown Atlanta,” Centennial Yards President Brian McGowan told Atlanta Business Chronicle. Over the next 10 years, the site will become a mixed-use district of offices, hotels, retail and homes spanning two MARTA stations — a revitalization effort that McGowan has envisioned as Atlanta’s own Times Square between Spring Street and Martin Luther King Jr. Drive. The development will connect several downtown neighborhoods separated by the vacant land, including Castleberry Hill and Fairlie Poplar. A third of the site is under some stage of development now, McGowan said, and the company completed its first suite of loft-style apartments in April. 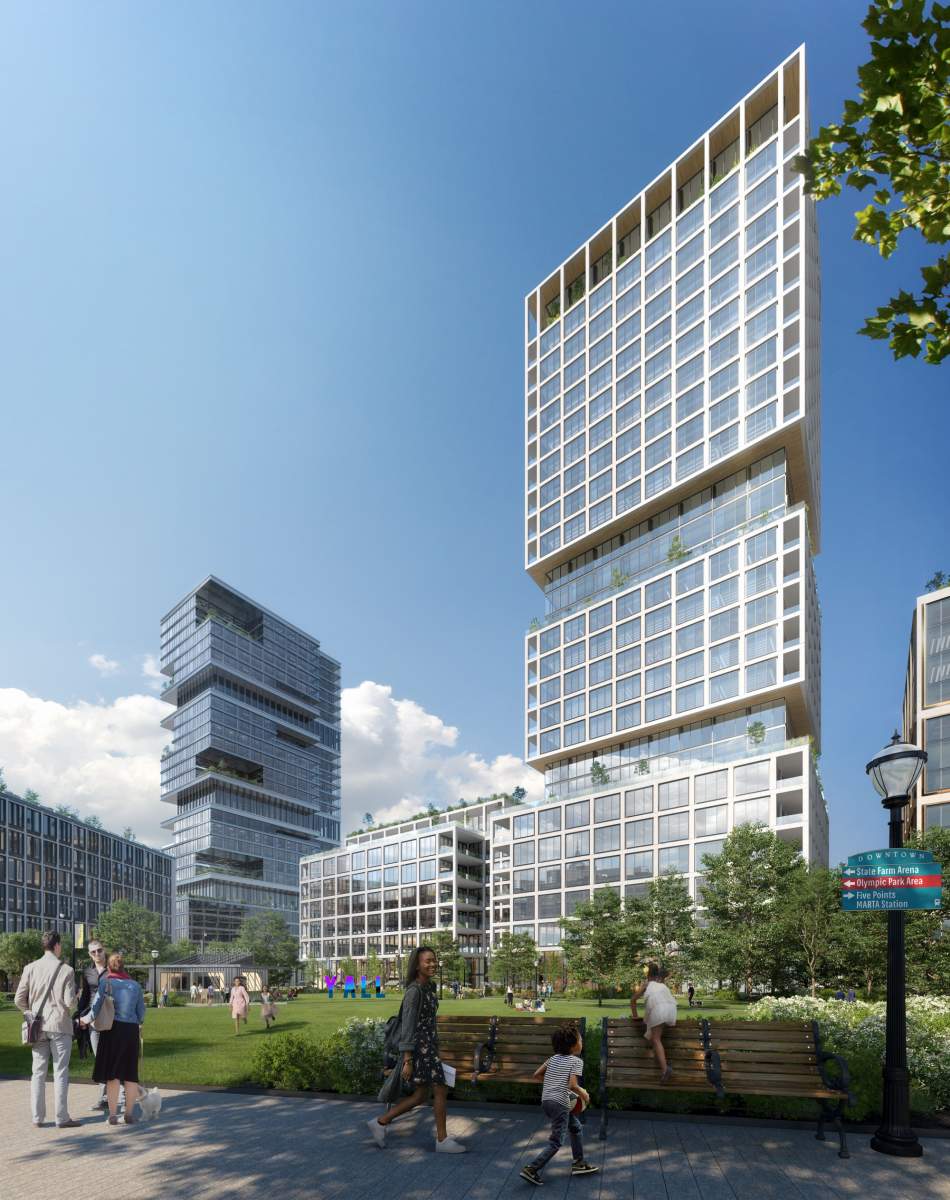 ​The project, which is led by Newport RE USA, involves the renovation and adaptive reuse of 47 historic buildings totaling one million square feet of existing space in an eight-block area just south of the Five Points MARTA station. Newport’s footprint encompasses the former retail district of ATL and the Historic Hotel Row District. 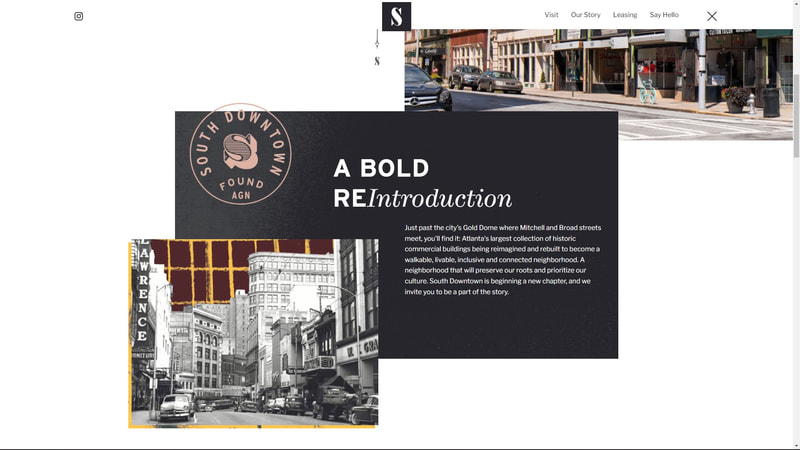 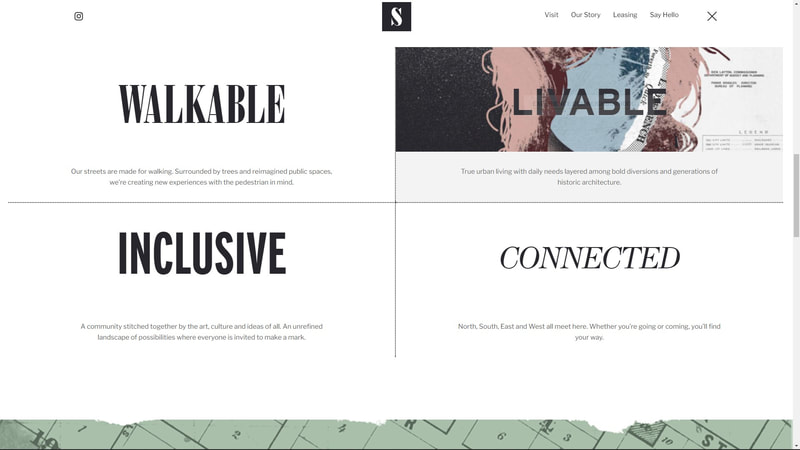 These images from the South Downtown marketing deck provide insights into what the developer (Newport RE USA) is hoping to achieve with this massive re-development project. 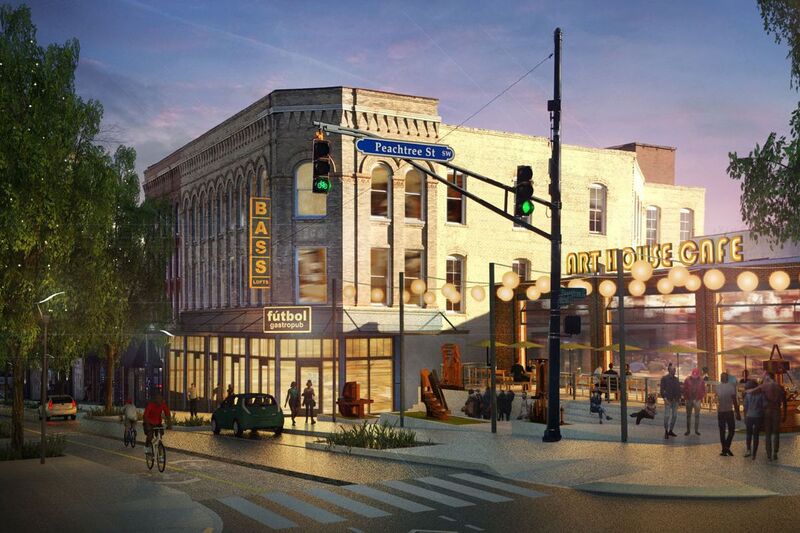 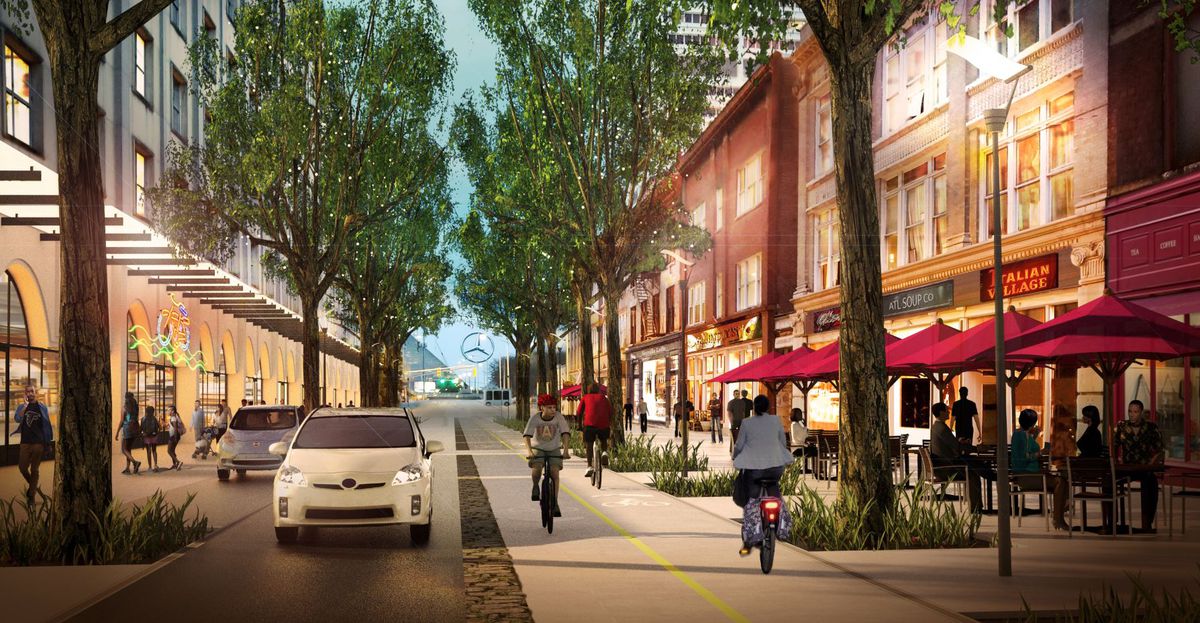 ​The Historic Hotel Row District (Mitchell Street between Forsyth Street & Ted Turner Drive) is a single block of historic commercial buildings along Mitchell Street that, when built, was part of Atlanta's original business district, in the shadow of the city's main railroad station. This district is largely unchanged from the beginning of the 20th century. Only the first-floor storefronts have been modified. The brick buildings are between three and five stories high with plate glass storefronts and symmetrical facades. Several buildings were built specifically as hotels. Source: US National Park Service 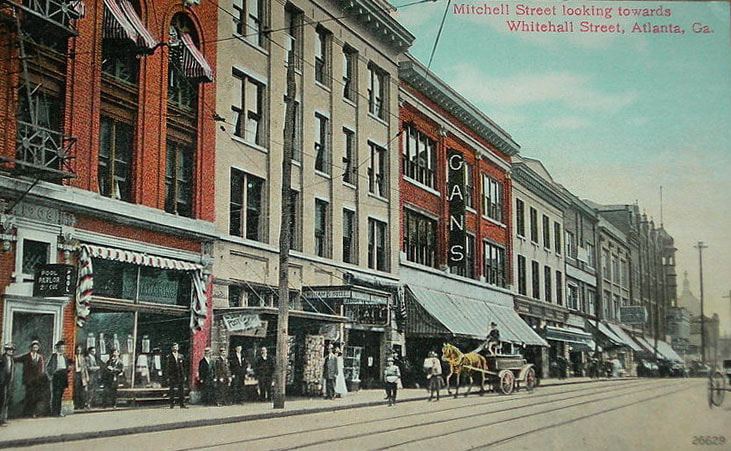 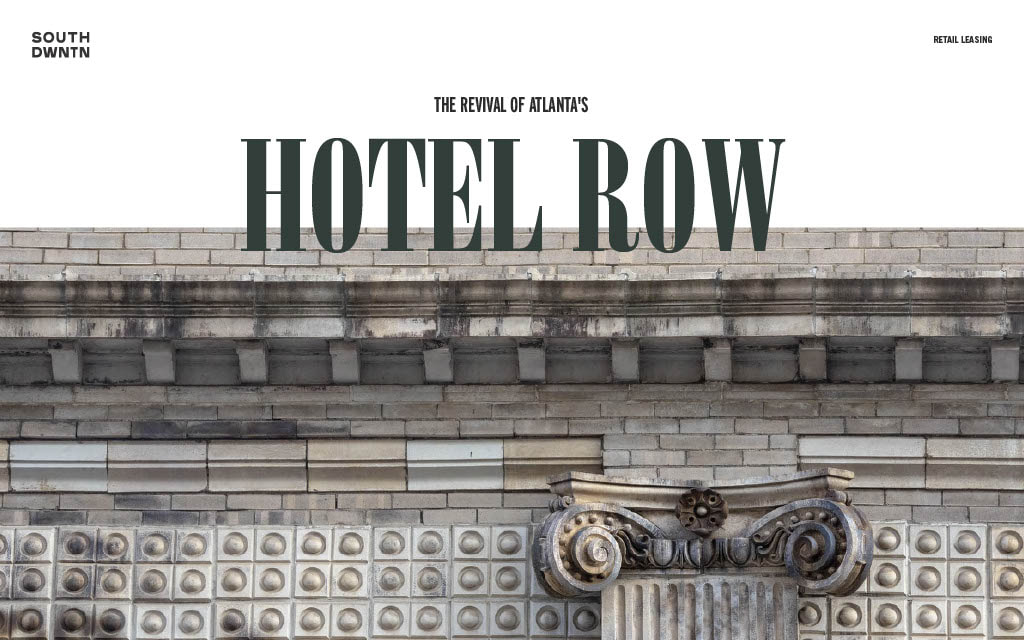 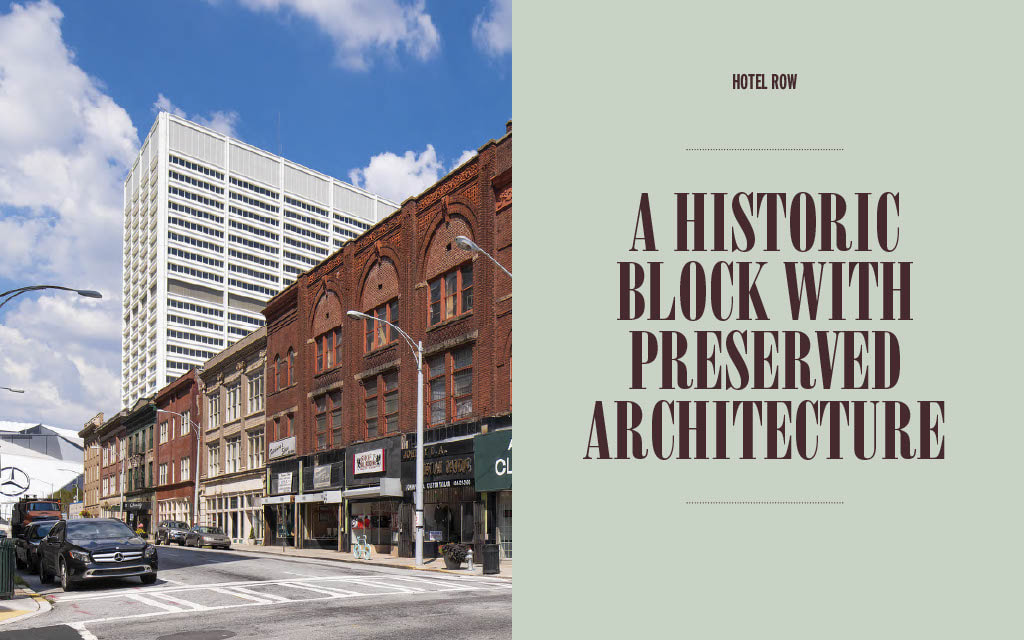 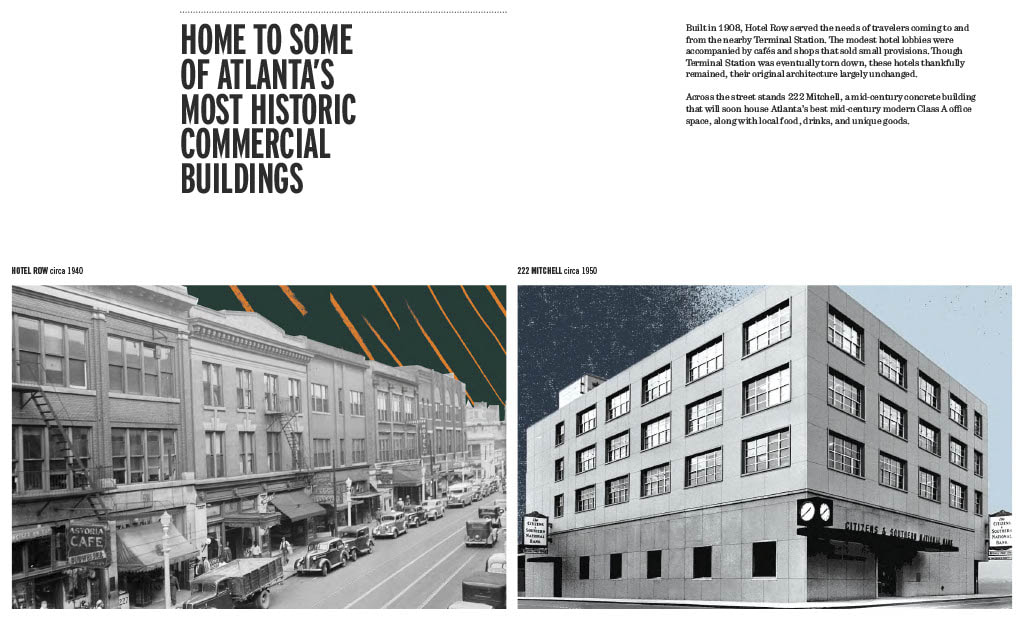 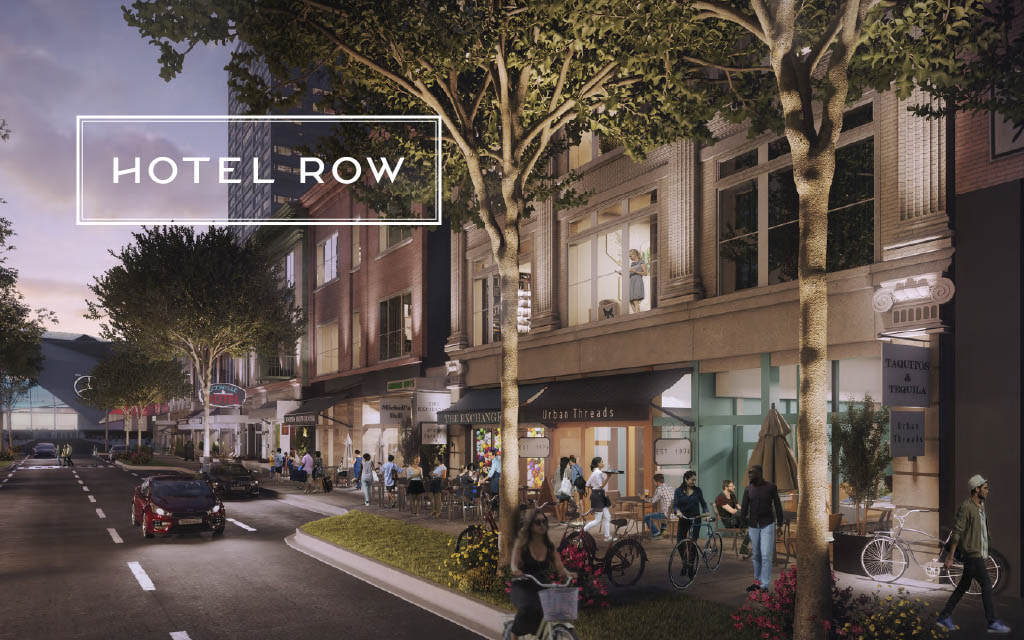 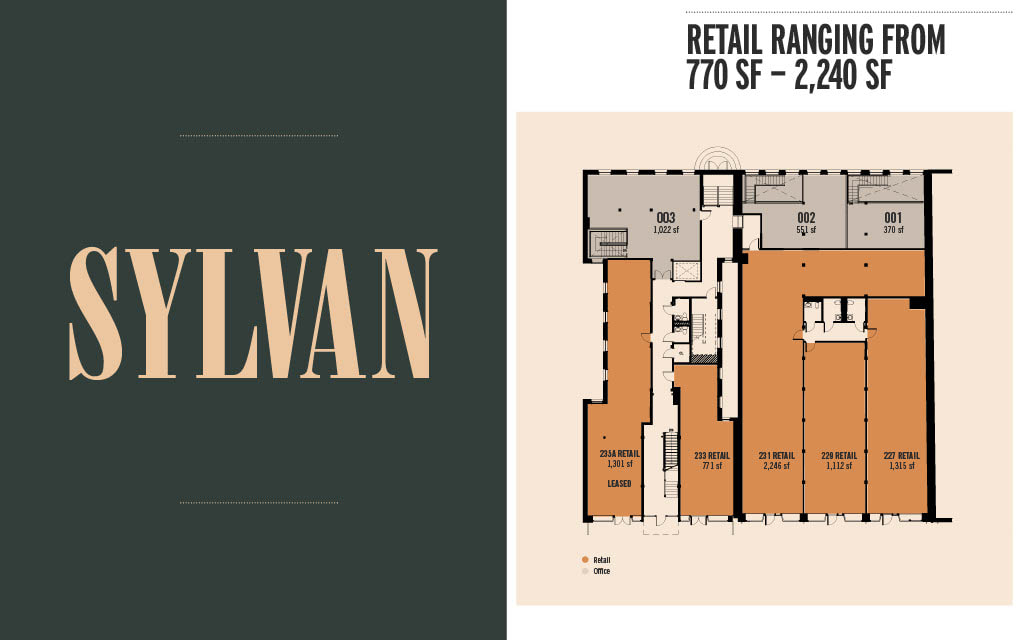 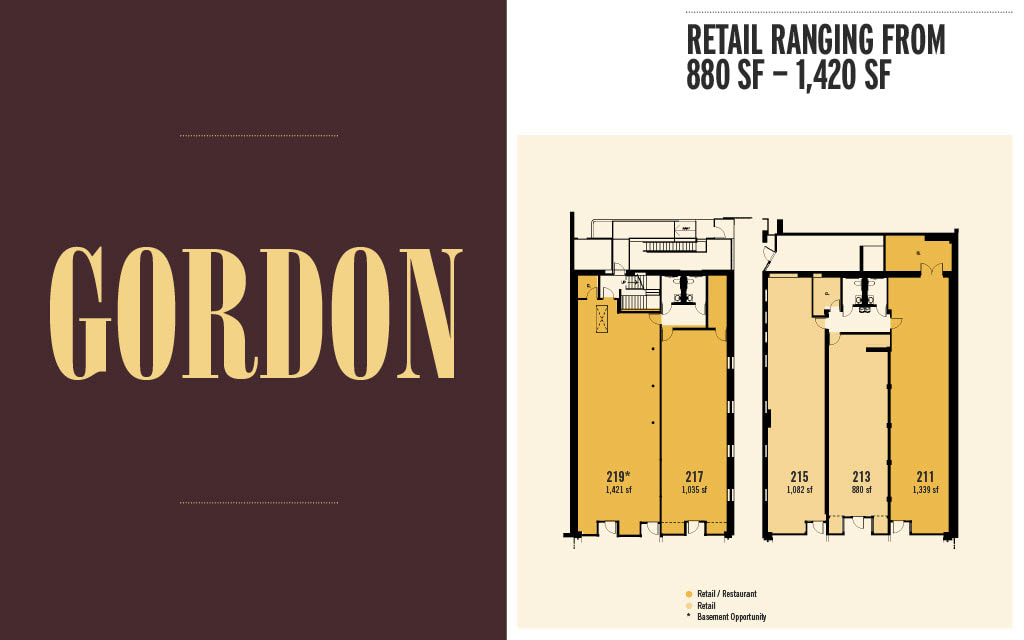 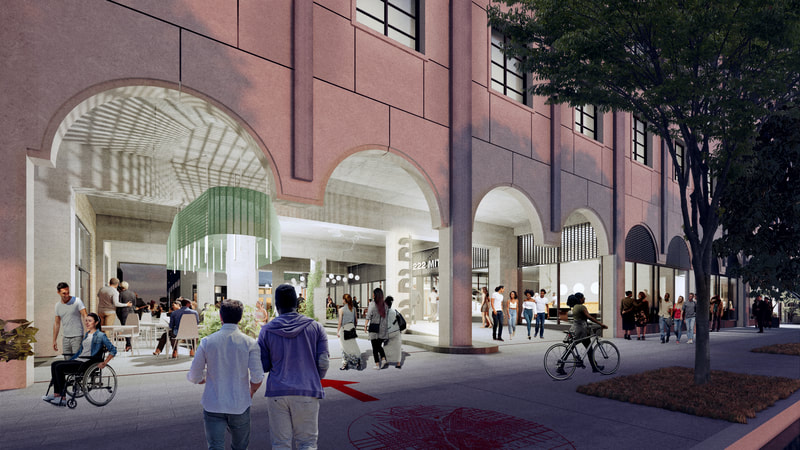 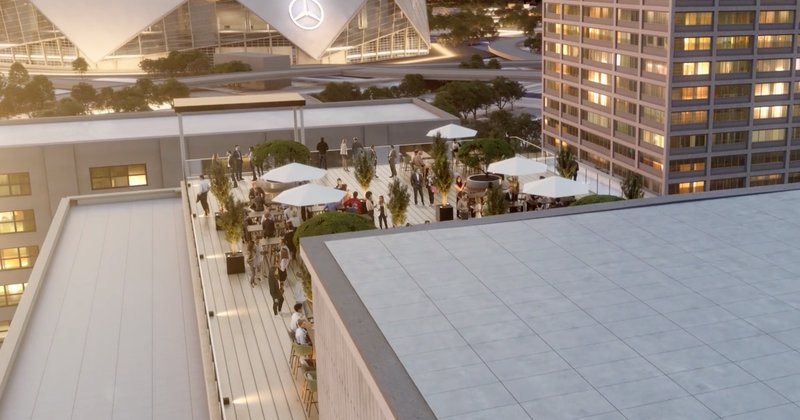 A rendering of the rooftop patio at 222 Mitchell. Arqui300
Part of the redevelopment plans for the historic 222 Mitchell building in South Downtown now include a rooftop diner open late night with a pie bar and cocktail lounge by Slater Hospitality, the restaurant group behind Nine Mile Station and Skyline Park atop Ponce City Market and forthcoming Leave of Absence (L.O.A.) at the Interlock. In addition to Slater’s diner and cocktail lounge, a location of Ohio-based arcade and game bar Pins Mechanical Company will also open at 222 Mitchell, to include 16 lanes of duckpin bowling, a rooftop patio, a courtyard, and three bars. The Slater Hospitality establishments and Pins Mechanical should open in 2023. 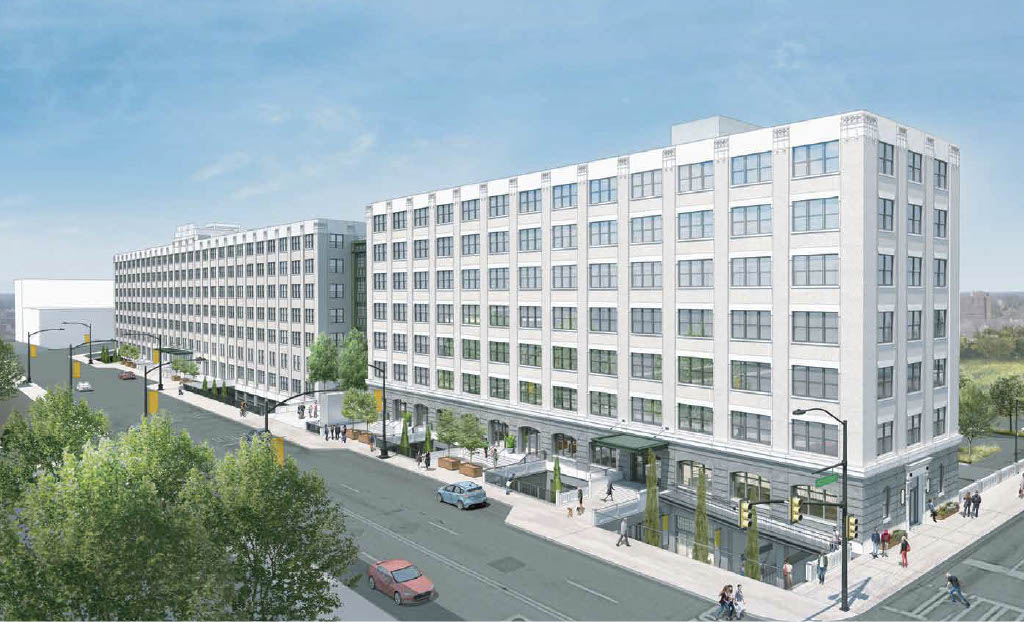 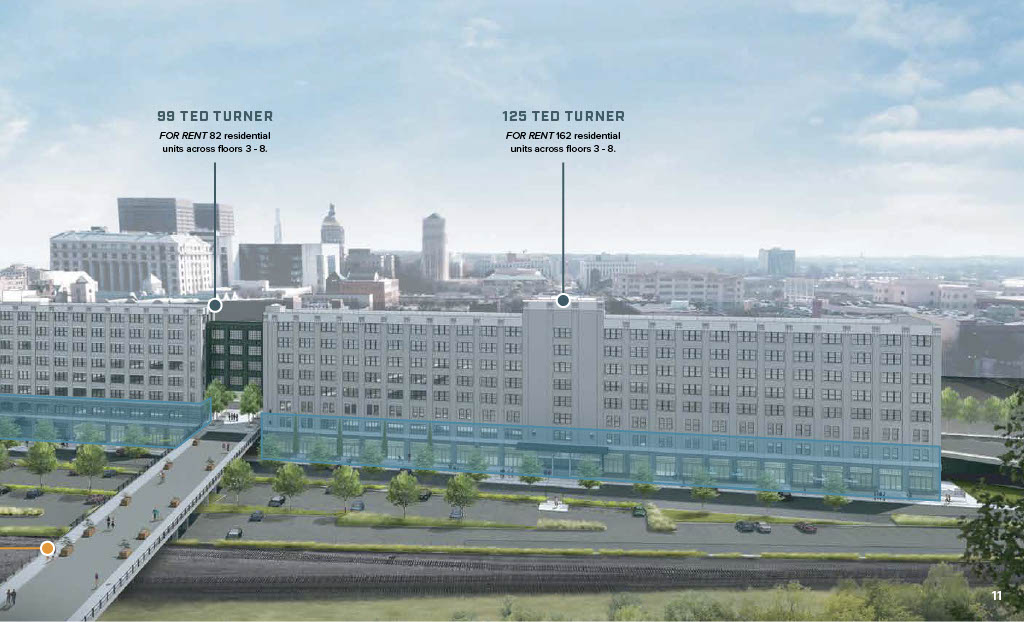 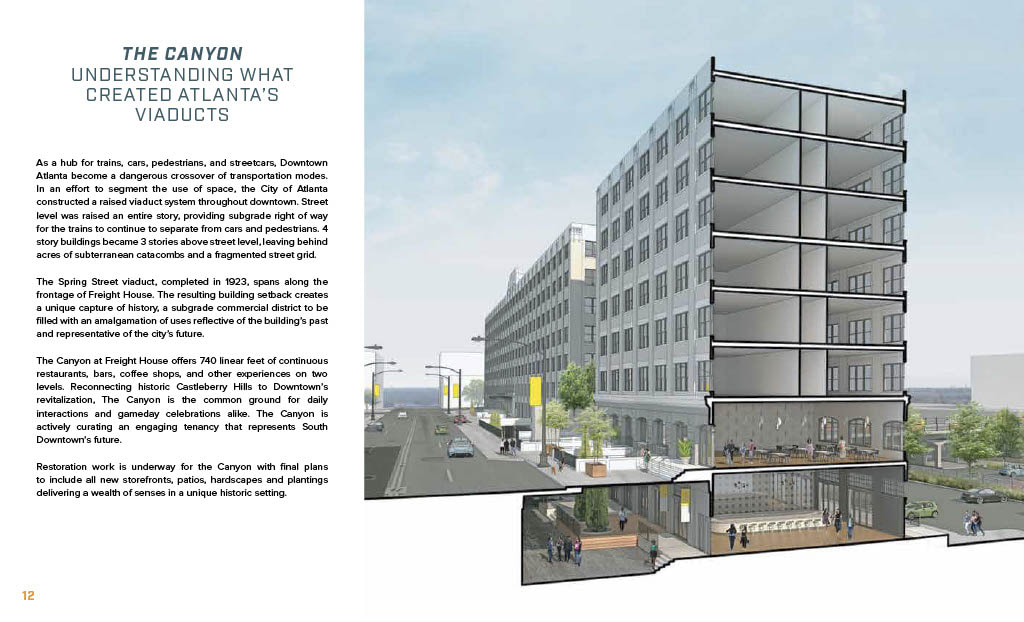 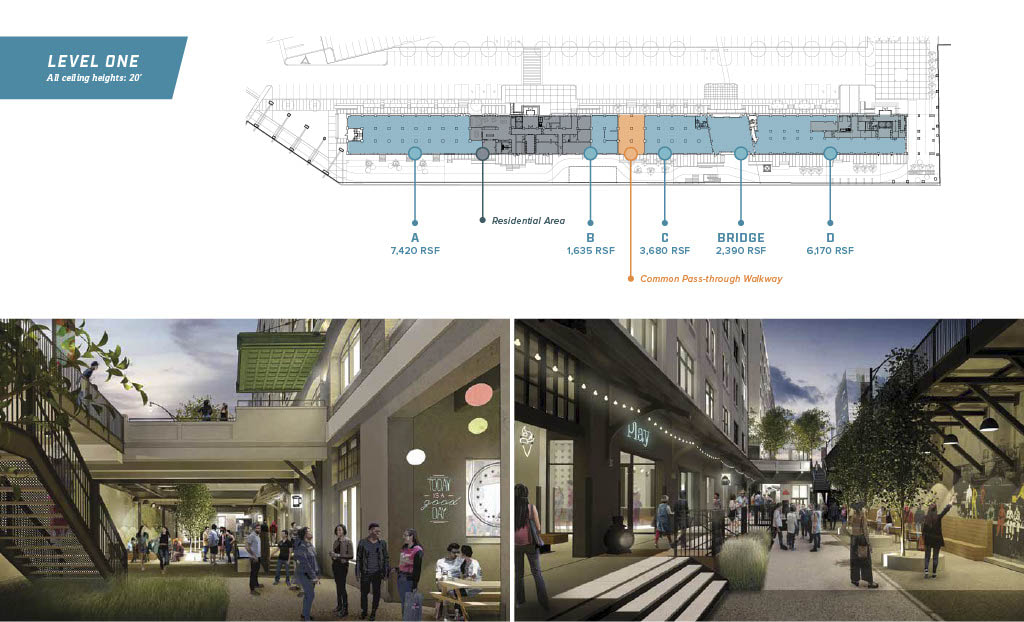